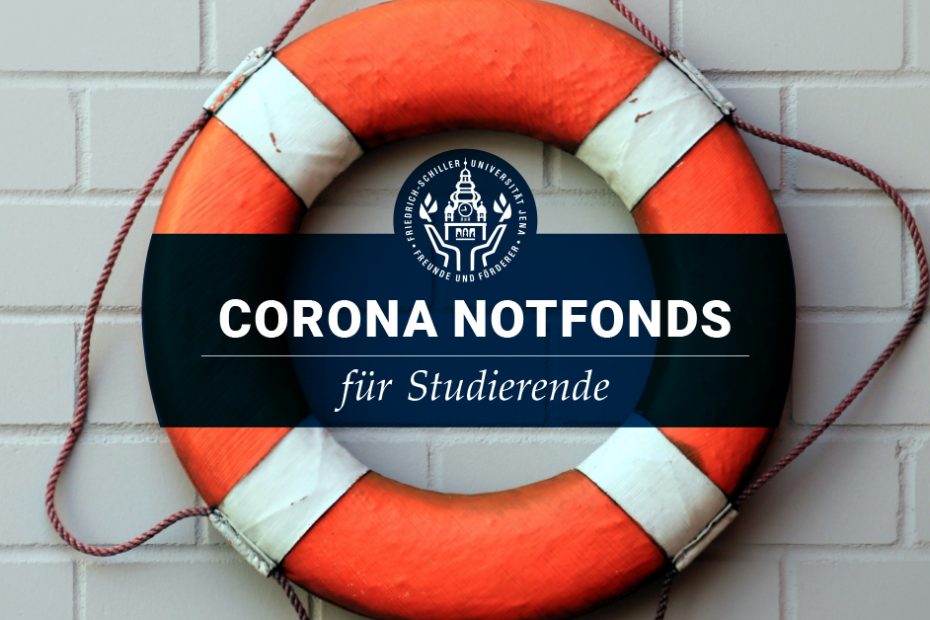 Almost 130,000 euros for students of the Friedrich Schiller University Jena have now been received in donations to the Corona Emergency Fund, which was set up by the Society of Friends and Patrons of the University. The aim of the campaign is to provide unbureaucratic help to students who have been hit hard by the corona crisis. For example, those who can no longer pursue their part-time jobs or those whose parents are unable to support them because they themselves have fallen into an emergency situation as a result of the pandemic. Especially international students and students with children are going through a difficult time under these circumstances. The financial support from the Corona Emergency Fund is a relief for many of them. Before the Easter holidays, the first students in need received emergency aid of 450 euros.

The initial donation target of 50,000 euros was reached after only a few days. "We had hoped for great solidarity, but were surprised by the extent and speed of the donations," said University President Walter Rosenthal, who is one of the initiators of the aid fund and, like many others, made a donation himself. In the meantime, almost 130,000 euros have been collected. "I would like to thank all donors on behalf of our students", says Rosenthal, who hopes that further donations will be received so that all applications from students in emergency situations can be approved.

The present donors come from all parts of society. Their motivation to support the emergency fund varies, but it shows the strong bond that exists between Jena's students and the Friedrich Schiller University. The first donation was made by the Jena chemist Prof. Dr. Ulrich S. Schubert. He says: "This is an important initiative of the Friends and Patrons, which I support with full conviction.“

Wanting to give something back

Among the donors are also former students from abroad such as Bradford Elder. He studied German as a foreign language in Jena from 2006 to 2011 and subsequently worked for the German Embassy in Washington. "The well-being of the university and its students is important to me personally," says Elder. "The university has given me a lot. The friends I made at university and the many fond memories still shape me today." He has supported the fundraising campaign because he still feels very close to the university many years after his studies.

Another generous sum from an alumnus even went halfway around the globe – the donation of Tsann-ching Lo from Taiwan. "My donation is really not worth mentioning. It is only a small contribution to this warm-hearted action by my alma mater," says the former PhD student of Intercultural Business Communication, who is still in contact with his PhD supervisor Prof. Dr. Jürgen Bolten.

Quick help for the future of Jena as a science location

In addition, numerous representatives from politics and business show solidarity. Among them is Anja Siegesmund. Thuringia's Minister for the Environment, Energy and Nature Conservation studied political science, German language and literature and psychology at the University of Jena until 2002, before she went into politics. Addressing the students, Siegesmund says: "Everything is different now, normal life is out of step. As students you need support just as much as companies or agriculture. From the federal government and the state – and from those who remain attached to our alma mater." Jena is an excellent location for research and science, the Minister believes. To keep it that way, it needs clever minds. "You are the future of this city. Now is the time for more solidarity. That's why I'm happy to participate in the emergency aid fund," she tells the students.

The idea of solidarity and the strong ties to the university also motivated Prof. Dr. Michael Kaschke. He is the former Chairman of the Executive Board of Zeiss AG and at the same time one of the initial donors of the Corona Emergency Fund. "The corona crisis represents a great challenge for all of us, and the current situation requires societal cohesion and solidarity more than ever," explains Kaschke. "As an alumnus of the Friedrich Schiller University and former member of the University Council, I am very concerned about the connection to science and the university. Therefore, I support this important campaign with a donation."

There is a great willingness to donate, not only among the alumni, but also among the current employees of the university. Employees from all areas, from the scientific institutes to the administration, stand up for the students with their donations. For example, Prof. Dr. Jutta Hübner, who holds the endowed professorship for Integrative Oncology at the University Hospital of the German Cancer Aid. She knows from her daily patient counseling and from her foundation that many people are now in need. "The fact that even our students are affected shows how deeply the current decisions affect our lives and, above all, continue to marginalize the weak – we have to do something about this," the professor points out. One member of the university administration, who wishes to remain anonymous, even donated a whole month's salary. "I owe a lot to the Friedrich Schiller University and would like to give something back," he told the university.

Around 500 applications have been submitted to the Corona Emergency Fund so far. It is thanks to the many donors that more than 220 applications have already been approved. Among them is student Afia Adade Frimpong's. She says: "I would like to thank the Friedrich Schiller University for this great initiative. I am very grateful for the help I have been offered in these difficult times". Every day the Friends and Patrons receive letters from grateful students. In this way the donors also receive something in return.

More information on the Corona Emergency Fund, how to donate and how to apply for funding can be found on the university's website.