In Memory of the Victims of National Socialism 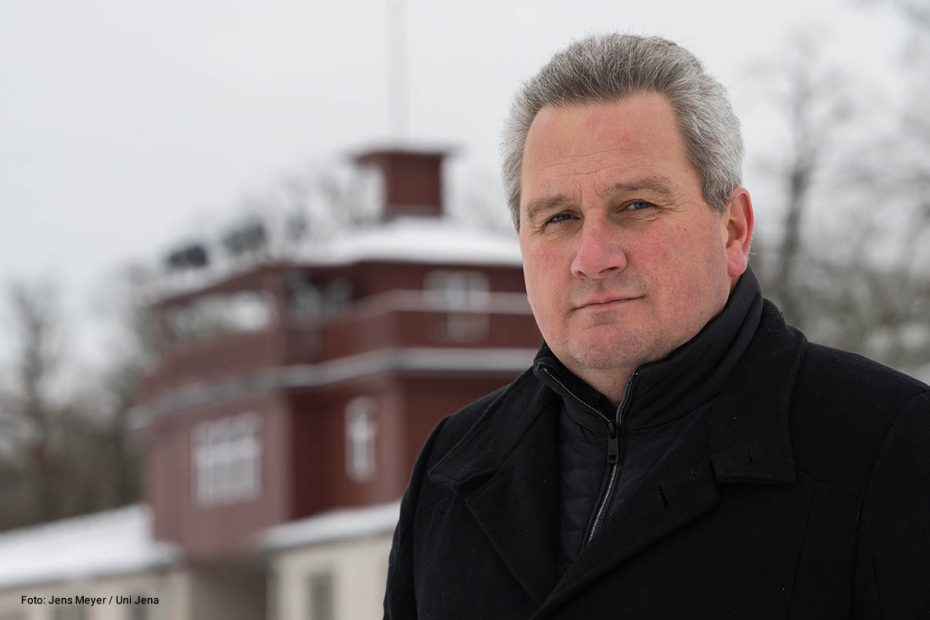 On 27 January, the victims of National Socialism are commemorated worldwide. The date also reminds us of the liberation of the concentration camps in Auschwitz. Prof. Jens-Christian Wagner is an expert on commemoration. He has not only held the Chair of History in Media and Public Spheres at our university since 1 October 2020, but is also the director of the Buchenwald and Mittelbau-Dora Memorials Foundation. In this interview, he explains the significance of this day of remembrance - for him personally, for Thuringia and for the victims of Nazi repression.

How important is 27 January as a day of commemoration and how do you think we should approach it?

Such days of commemoration are important for the collective memory of society, even if they sometimes stagnate in rituals and pathos and are seen by some politicians, I fear, as a routine exercise. This makes it all the more important to fill memorial days with content and not just to "celebrate" them centrally, but to go into depth topographically and thematically - just as Nazi crimes were not only committed at central places like Auschwitz or Buchenwald, but almost everywhere, even in the smallest village: crimes against forced labourers, Jews, Sinti and Roma, prisoners of war, the sick, prisoners of justice, the politically persecuted, homosexuals, Jehovah's Witnesses or so-called "asocials".

How should or how can we keep the memory of the victims of National Socialist reign alive independently of this day of remembrance?

It is important not only to mourn the victims and then go home thinking that everything is fine today, but to ask why the crimes were committed: How could this actually happen? Who is responsible for the crimes? Central to this is the question of how Nazi society functioned, a society that was radically organised along racist lines and made a distinction between "Volksgenossen" on the one hand and "Gemeinschaftsfremden" on the other. If one asks why so many Germans willingly went along with the Nazis, one will find that some of the driving forces were not genuinely NS-related at all.

I am thinking, for example, of promises of inequality or discourses of exclusion and criminalisation against supposed "foreigners". These are things that we also experience today beyond false historical analogies, think for example of the agitation against refugees or the AfD's völkisch "social policy". The perspective of dealing with Nazi crimes must therefore be directed towards the present, but not as an agit-prop event, but always scientifically justified and ethically grounded - and not only on 27 January, but also on the other 364 days of the year.

Are the victims of the Nazi era also commemorated in Buchenwald and Mittelbau-Dora on 27 January?

Actually, the central commemoration ceremony of the state government and the state parliament was to take place this year at the Mittelbau-Dora memorial. However, due to Corona, this had to be reduced to a wreath-laying ceremony in a very small circle: I will lay a wreath alone on 27 January. However, we will produce a video in advance with historical information on the topic of "Auschwitz in the Harz Mountains" and statements by Minister President Ramelow and Landtag President Keller. This video will be released on 27 January.

It is difficult for me to speak apodictically of right or wrong. Everyone has to find his or her own way of commemorating. Nevertheless, there are forms that I do not consider appropriate - identification with the victims, for example. I consider that presumptuous. Empathy, on the other hand, is important. Moreover, we should commemorate all victims of Nazi crimes, not just individual particular groups. This also means that we should not "lump together" all the dead of the Second World War. Since the 1990s, there have been many memorial plaques commemorating without distinction those persecuted and murdered under National Socialism, the fallen German soldiers, the victims of flight and expulsion and those persecuted in the GDR. This is ahistorical and fails to recognise the causal relationship between cause and effect. We must counter this with a scientifically based and clearly differentiating examination of history.

And then there is the sentimental commemorative kitsch, which I also consider inappropriate. Two years ago, for example, I witnessed a commemoration by an evangelical group in Bergen in the Lüneburger Heide, where a young woman in prisoner's clothing with a yellow "Jewish star" on her chest and wrapped in the Israeli flag danced to the Israeli national anthem in front of the local war memorial. You can watch the recording on Bible TV.

From the official side, offers of collective commemoration are made, for example when the Federal President gives a speech on 27 January. Are there other forms of individual commemoration? How could these look like?

It is an important political signal, especially to the survivors, when high representatives of the federal and state governments acknowledge Germany's responsibility in dealing with Nazi crimes and pay tribute to the victims. Days of remembrance such as 27 January or the anniversaries of the liberation of the Buchenwald and Mittelbau-Dora concentration camps on 11 April are also important for this. Of course, "ordinary" citizens can and should also help to ensure that the victims are honoured. They can do this, for example, by walking awake through their hometowns and using the Stolpersteine (stumbling stones) to visualise who all from their town became victims of Nazi terror. In almost every town there are also graves that can be visited. Personally, I was very shocked years ago by a photo showing a small baby whose body was recovered by the Americans in April 1945 from the liberated concentration camp in the Boelcke barracks in Nordhausen and deposited in a mass grave in what is now the cemetery of honour. It was important to me to lay flowers on the grave in silence and beyond the official days of remembrance - for a child who, according to the will of the Nazis, was only allowed to live a few weeks.

Thank you very much.