"Where in a Lake Which Stones Are Lying, We Can Tell From the Waves" 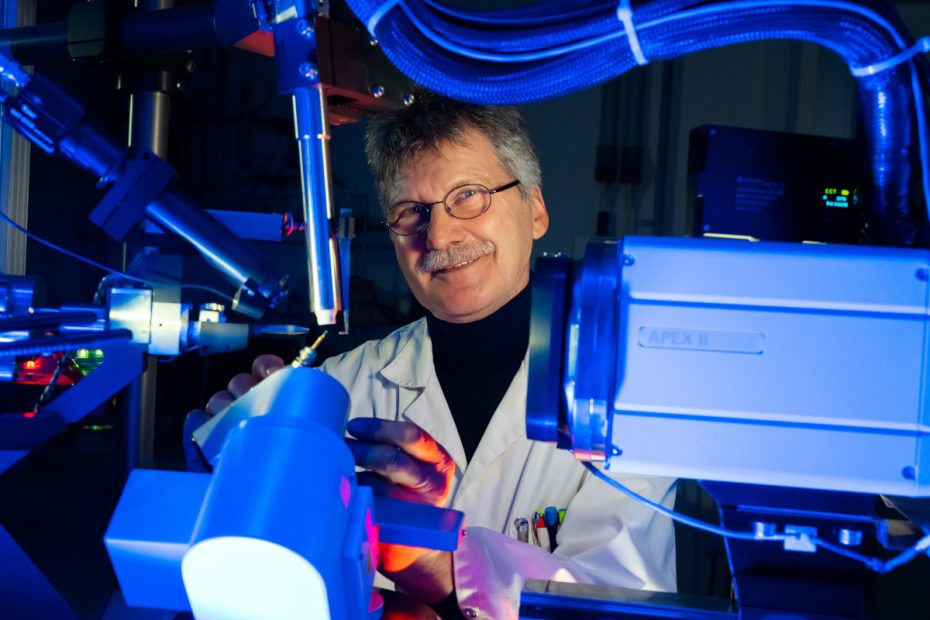 With his work in structure analysis, Dr Helmar Görls has significantly contributed to and shaped the field of chemistry at the University of Jena over the past decades. This year, the probably best-known member of Prof. Dr Matthias Westerhausen's research group at the Institute of Inorganic and Analytical Chemistry is retiring.

To explain what he does, Helmar Görls uses an image: " Suppose you are walking along a lake with your partner. They take a few stones, ask you to close your eyes and throw the stones into the water. You now open your eyes again and see the ripples that the stones have caused on the surface of the water. And now you are supposed to try to tell exactly where in the lake which stones are lying, based on the wave patterns. This is basically what I do with X-ray diffraction. Instead of a lake, however, I examine crystals to find out how the atoms are arranged in the molecules that make up the crystal. And the wave patterns I observe are created by X-rays."

What once took years now takes an hour

When X-rays impact on a crystal, they get diffracted. A pattern of reflections emerges, from which the exact three-dimensional structure of the chemical substance that makes up the crystal can be identified. "When I determined my first structure in 1984, it took me a year," explains Görls. "That was entirely manual work. The patterns of reflections were recorded on X-ray films and each individual reflection was manually typed into a punch card for the computer. We had to wait overnight for the computing solution, and some of the calculations were done over the Easter holidays. I then constructed the spatial structures that were determined in the process, partly from plastic beads, insulating tape and knitting needles, as a model with millimetre precision." What used to take a year now takes an hour. Handmade models have become computer screens, 3D glasses and 3D prints.

The importance - and the complexity - of X-ray diffraction for science was demonstrated not least by the biochemist Dorothy C. Hodgkin in 1955, when she used this method to determine the structure of vitamin B12. Only then was it possible to precisely study this vital substance - and finally to produce it artificially. Today, this method is used worldwide to determine the exact structure of chemical compounds, such as that of an enzyme which the Corona virus SARS-CoV-2 needs to reproduce.

" Dorothy Hodgkin needed 30 people and five years to determine the structure of vitamin B12. She received the Nobel Prize in Chemistry for her work in 1964. I do it in a morning nowadays," says Görls with a smile. How much technology has developed still amazes him. "You can put a device like that on your kitchen table today - appropriately shielded, of course."

Contributions to almost one thousand publications

If a chemical substance can be grown into a crystal, Helmar Görls can determine its structure. He has determined a total of 7,457 structures in this way at the University of Jena. About 2,700 were so interesting that they were published and deposited in a database. More than nine hundred publications have been produced in the process, to which he contributed through his work at the Friedrich Schiller University.

"Many chemists often imagine my work to be a bit too simple," he says retrospectively. "I started in a time when structural analysis was something very special. Only when all other analytical methods for structure elucidation had been exhausted, an X-ray structure analysis was done. Today it is often the other way around. In this respect, I wish that more emphasis would be placed on using other measurement methods, especially in practical training."

Connected to the university for 40 years

Helmar Görls has been linked to Jena for more than 40 years. He studied chemistry here and after receiving his diploma in Leipzig, he was awarded his doctorate in Jena in 1985. He specialised in his measurement method after the German reunification during a research stay at the Max Planck Institute for Coal Research Mülheim, before finally returning to Jena and starting his important work in structure analysis.

Görls brought one of the two X-ray diffractometers he works with from Mülheim to Jena when he was supposed to set up the structural analysis department here. "The device was built in 1974 and it still runs today," he explains proudly. In addition to the carefully maintained "old-timer", Görls also has a modern device equipped with a KappaCCD area counter. "This diffractometer has been repeatedly upgraded to the latest state of the art in recent years. Now, however, it is technologically maxed out and getting on in years. With a diffractometer of the latest generation at the Institute, it would be possible to obtain initial structural information on vitamin B12, for example, within five minutes," says Görls.

In Jena's chemistry department, Helmar Görls is known to almost everyone. Not only in research, but also in teaching, where he has been supervising students in the basic practical course of the first semester since 2000. "Sometimes I used to conduct antestats - actually short talks with the students before a concrete chemical separation process - which would last three to four hours," Görls recalls. "The students really have to understand what they are doing in the lab, because they are sometimes handling dangerous substances. That doesn't always work in self-study, so I take the time to convey the necessary knowledge."

Helmar Görls' retirement actually begins on 1 June. "But I will stay until 30 September to train my successor. And of course I'll still be happy to help with questions or problems after that." As a grandfather of nine, Helmar Görls is sure that he will not be getting bored in his retirement.