"At the beginning, my life was really turned upside down." 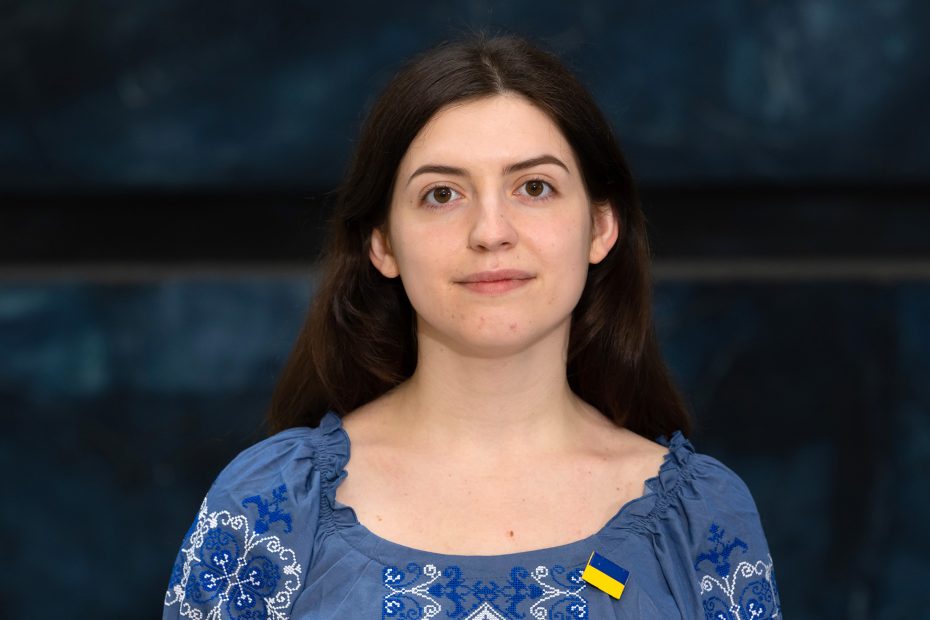 Andriiana Raikova is Ukrainian. She comes from a small town in the south-east of the country and has been studying German as a foreign language at the University of Jena since the 2020/2021 winter semester. We talked to her about how she experienced the outbreak of war in her home country.

How did you react to the news of war in your home country, Ukraine?

War isn’t a new issue in Ukraine. We’ve been concerned with it since 2014, but it only ever affected one part of Ukraine. (Editor’s note: Russia’s annexation of the Ukrainian peninsula of Crimea and occupation of the Donbas region in 2014 are seen as the beginning of the ongoing conflict.) At that time, I was still at school. I knew more or less what was happening. Since then, there have been differing opinions in Ukraine. For example, there were a few people who preferred to be with Russia rather than Europe. But no one could have foreseen that such a major war would now really break out throughout the country. My parents always said that it would never happen. When I got up on the morning of 24 February, I got the message from home: “War has started in our country.” The first few days were very hard for me. I couldn’t really understand what was happening there. I was only able to understand after a few days.

In what way are you and your family directly affected?

My parents are still in Ukraine. They live in a small town in the south-east. They don’t want to leave their house and their country. They told me: “We’ll defend ourselves as best we can.” They don’t have any weapons and they’ll defend themselves, to the best of their ability, by all other means.

How often do you have contact with your family and others in Ukraine?

Luckily, we’ve had frequent contact so far. In the first 10 days, my parents and I wrote to each other many times a day, sometimes every hour. I had contact with friends once or twice a day. It was possible at first, because the mobile network was still OK. But since then, there have been problems with it, so there are major communication difficulties. Luckily, I still have contact with my family.

I’m very happy that I hear from my parents every day. If I imagine that no longer being the case, I quickly imagine terrible scenarios.

There are Russian channels in our small town. At first, my dad listened to these channels a lot. He wanted to find out what was being said there. But he can’t stand it any longer. He says they only broadcast propaganda and misrepresent everything.

I also hear that from friends in Russia. Their news makes me sad; it’s shaped by Russian propaganda. And that’s why it’s all the more important for us to spread the word about what’s going on in Ukraine. In Russia, many people don’t have any access to neutral information.

How do you currently see and evaluate the situation?

Everyone in Ukraine has the same opinion. The army is very courageous and our president is seen as a hero. People have taken to the streets. Generally, there’s great cohesion in Ukraine and you can say that so far, Ukraine has held onto its identity. In Ukraine, people believe that nobody needs Putin’s help. (Editor’s note: according to his own statements, Russia’s President Vladimir Putin is pursuing the demilitarisation and denazification of Ukraine.)

Many of my school friends are also working to support our country. Only a few of them are actually in the army; most are with the Territorial Defence Forces. (Editor's note: Ukraine’s Territorial Defence Forces consists of reservists and Ukrainian or international volunteers. They are an organisation of the Ukrainian Armed Forces and independent of the Ukrainian Army.) They’ve all developed an extremely strong character that I would never have expected of them in the past. Many of them even signed up voluntarily. They also keep in contact with friends and family, and report what’s happening and what they’re able to find out. Nevertheless, my impression is that the mood in the army is much better than among the civilian population. They simply don’t have time to worry. They have to act.

What are you doing yourself and where do you see a need for action?

I go to demonstrations and events. There, I meet like-minded people and at the same time call on others to help. You can also exchange views in groups on Telegram. In addition, in Thuringia there’s the organisation “Ukrainian Compatriots in Thuringia”. We can share ideas there, too. And they also come to the demonstrations in Thuringia.

It has struck me that here in Germany, at demonstrations and on the radio, you heard statements and speeches by Putin as well as Chancellor Scholz. But no statements from Ukraine. Why not? Together with others, we’ve started to translate the speeches of our president, Volodymyr Zelensky, and play them at demonstrations.

It’s now important that a lot of money is donated. But it’s even more important to bear in mind that a lot of the donations will also be needed later. It shouldn’t all be donated now, at the beginning, but continually over a long period. In addition, many donations can’t even reach some cities and regions at the moment, for example because the roads have been destroyed.

In Jena, for example, you can register as a voluntary translator and interpreter, and in the future, German teachers will also be needed. It’s important for the refugees to have opportunities to learn German for free. I’m currently also helping as a translator and interpreter. I do interpreting and try to organise rooms where German courses can take place. This is important because only a few of the refugees can communicate in German or English.

How has your life or your daily routine in Germany/in Jena changed? Can you imagine a future?

At the beginning, my life was really turned upside down. In my thoughts, I was always in Ukraine. In that respect, I probably speak for all Ukrainians. But my parents want my life to continue here. So, I have to learn to live with it.

Many Ukrainian cities no longer exist and people have left a lot behind. Europe must therefore stick together, help and take in refugees. I very much hope that a new era will begin after the war, one that shows independence. Until then, I hope that the world will continue to support Ukraine. Poland, for example, has already done so – and no one would have expected that previously.

But this war also shows that we must take a stand against war all over the world. It’s our duty to be informed and to help. Now that war is so close, I realise what I have ignored up to now.