"The war will leave its mark on people’s minds" 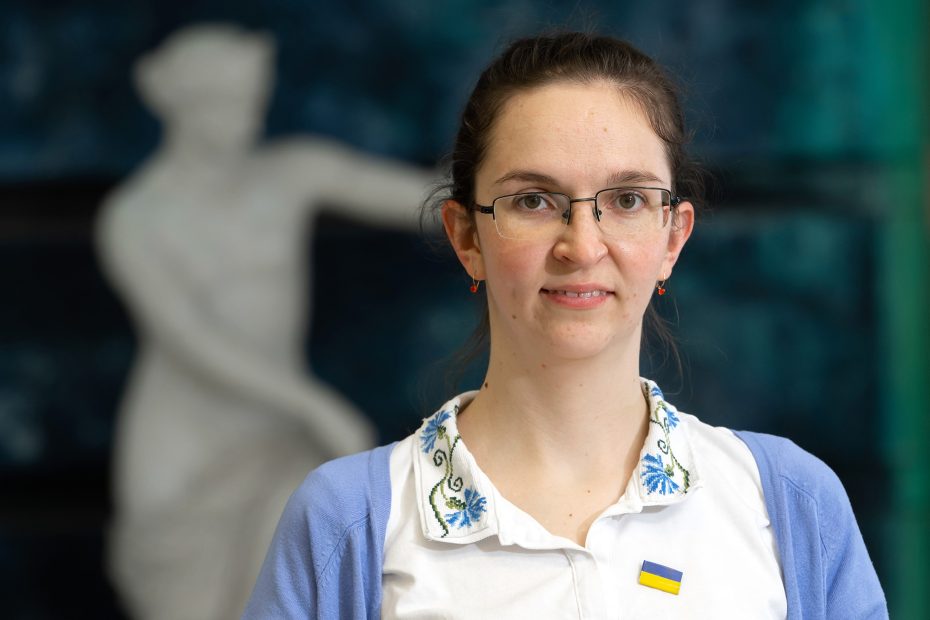 Olena Nosovska is 24 years old. She comes from Ukraine, from a village near Kyiv. After completing her Master’s degree in Chemistry, she is now doing her doctorate at Friedrich Schiller University Jena. She came to study in Jena in the 2018/19 winter semester. Part of her family has now fled Ukraine and come to Jena.

What was it like for you when you heard about the war?

I wasn’t prepared for war, not even in my thoughts. I’m the only member of my family living in Germany. The rest are in Ukraine and live in a village near Kyiv. The night before the attacks, I was on the phone to my father and we were talking about trivial things – how I should fix something on my washing machine. I also talked to my parents about the political situation in the country and I spoke to them about why reservists were being called up and whether it also affected my dad. But we didn’t talk about war.

The next morning, at around 8 o’clock, I read a message from my dad telling me to call him. On the phone, he told me that bombing had started and that a war had broken out. But the most important info for me was that everyone was fine and in good health.

But they asked me to help them bring my 22-year-old sister to Germany. My brother is still too small to travel alone and my parents were not ready at that time to leave the country. They have everything there and didn’t want to leave, in spite of the war. For my family, the outbreak of war was absolutely unexpected.

It was very stressful for me. I was very nervous and restless.

What did you do then?

I first contacted a friend who had come to Germany as a refugee from Syria. We studied together, so I know him quite well. Although we had never talked about his flight from Syria, I called him and asked him how he managed to escape back then. I asked him whether international organisations arranged the escape or whether he set out on his own, and what one needs to think about. He said it would become increasingly difficult to escape in the coming days. The sooner my sister set out, the better she would manage. And it was very likely that no one would organise the escape inside Ukraine, only outside the country. My sister should make her way to the border on her own.

I passed this on to my family and explained to them that I could take care of the journey outside Ukraine first.

Did your sister mange to escape?

Now that part of your family has managed to escape, how are the refugees who are arriving here? How can they be better supported?

The people who arrive here have had traumatic experiences and have experienced a lot of stress. The attacks and fighting took place about 30 km from my parents’ village, but they could hear the explosions and the sounds of war. The effects of these experiences are also noticeable here. People react very differently to sounds and are sometimes frightened when I knock on the door.

My family fled by car to Poland, where they had a short rest with my aunt and then came to Jena by train via Prague. Something that did them good and that surprised them was that even in Dresden, the station announcements were in Ukrainian.

You have to understand that the refugees are under stress. They’ve been through a traumatic experience and for many of them it’s their first time abroad. Hearing their native language is immensely reassuring and supportive. That’s why translators are also very important.

My family were also pleasantly surprised by the great solidarity shown to the refugees. Even though it’s complicated working with people who don’t speak the language, there’s great mutual support. All the fellow passengers in the overcrowded trains were also very helpful.

There’s room for improvement in transport. The long, full trains are often separated at stations. If the announcements are not in Ukrainian or Russian, many people don’t know whether they’re on the right part of the train and where they have to go next. This is where transport companies should invest in translations.

How do you communicate with the part of your family in Ukraine?

I’m in regular contact with my father. There’s an internet connection and we can talk on the phone. I also ask him about my grandparents and other friends and relatives.

How is the humanitarian situation in your father’s neighbourhood?

The most important services are available. You can still get water, electricity and food. But I know other families living further east in the country where things are more difficult. It’s also hard for distant relatives to get supplies in cities already occupied by Russia, for example in Zaporizhzhia, where the internet also isn’t reliable. That’s why help from abroad is important. Even with enough money, it’s often difficult to buy things because logistics are impaired by the war.

Do you know whether aid shipments from abroad are arriving there?

I can only pass on what my contacts tell me. The Ukrainian army is very well-equipped. My father provides logistical support to the Ukrainian army as a volunteer. There’s a shortage of protective equipment for the civilians who help in civil defence. They have weapons, but no helmets.

However, the aid shipments that arrive are well-distributed around the country and there’s a huge amount of support from abroad. Support for hospitals is also important.

What do you think should happen politically?

People are talking about a no-fly zone over Ukraine. NATO should take that on. In my opinion, that would be a helpful action. It would protect Ukraine from heavy shelling and attacks from the air. This would provide more security for the civilian population and fewer people would die. Even though the Ukrainian army is already doing this to some extent, I wish we could have support in this. And more equipment and technical support would be useful.

Do you have relatives in Russia or contact with the country?

Yes, we have relatives in Russia. They’re distant relatives through my grandad.

Do you think the war is also causing divisions and conflicts within the family?

There were already many divisions within the family when the Russian annexation of Crimea took place in 2014. Our relatives became supporters of Russia at that time. Currently, propaganda in Russia is very strong and for that reason, our relatives in Russia believe the propaganda rather than what my grandad – their family – says.

I think it’s almost impossible to open their eyes and convince them of the truth. But we should definitely try and leave no stone unturned. The best thing would be to stop Putin. Then maybe you could also stop the propaganda.

How did the outbreak of war change your life in Germany?

In the first few days, it was a big shock and a lot of stress and anxiety. On the one hand, I didn’t want to read or listen to the news, but on the other hand, you want to know what’s going on. Your mood swings up and down, depending on the information you get. This emotional rollercoaster isn’t good for you.

My work as a doctoral student has of course distracted me and calmed me down a bit. But at the same time, you’re always thinking about how to help. Priorities have shifted a lot: work takes a back seat and you don’t care about the weather. The important thing is to stand up for your family and compatriots. I also talk about it with my colleagues – they notice that I’m not behaving normally. They’re very understanding and offer their support.

I also think it’s important to set up information channels to inform everyone about the war and hopefully to end the war soon through education.

Have you achieved anything specific in that context?

At first, I didn’t know that there were so many Ukrainians in Jena. We’ve formed a network and let each other know where help is needed. That’s how we distribute the tasks among helpers. We became involved as translators when a bus with refugees arrived in Jena. Right now, I’m translating an information sheet on rapid test swabs, because the refugees are in quarantine initially when they arrive here. They have to be tested first. With a translated information sheet, we can support the professionals responsible for the tests.

I also think the demonstrations and rallies that take place in the city are extremely important. It’s important to get the attention of society, in order to explain that it’s a war against Putin and not general discrimination against Russians. It’s about ending the dictatorship and securing the freedom of many people, not only in Ukraine, but also in Russia, Kazakhstan, Georgia.

How can the university or the city help further?

The city and the university have already organised a lot of help and support and there’s plenty of information. Together with my family, I’ve talked about how it would be great if there were a place all Ukrainians could turn to. Comparable to the International Office, but exclusively for Ukraine.

The refugee children are particularly important to me. They don’t speak German, so integration in German schools, kindergartens, etc. is difficult. A new language and a new country mean additional stress for them. Therefore, it would be great for them to have a meeting place where they could exchange ideas with other refugee children and their parents or also learn together. The children shouldn’t have the feeling of being on holiday, but should continue to learn, enjoy distractions and – very important – also do sports. Perhaps the city and the university could also think about activities here.

Is there anything you would like Germany or your German environment to do more of?

I’d like them to continue as they’re doing now. And not to forget. But unfortunately, I fear that there will only be a strong response at the beginning and that it will soon subside. That must not happen. It’s a war and innocent people are being killed every day. The war will not end on its own and we have to help together. There’s a great willingness to help in Germany, and that should continue. Ukraine is very happy about this. Together we can hold out and work to achieve an end to the war.

What will happen now for you, your family and your fellow Ukrainians? What are their hopes?

Now, and especially in the future, the Ukrainian language will be heard in very many countries, because the refugees are spreading out. People will definitely know more about Ukraine and about Russia, about the difference between the languages, about geography, and so on. The war will leave its mark on people’s minds.

Ukraine will live on when the war is over. The country has made it clear to its inhabitants that peace is the ultimate goal. Countries such as Poland, Latvia, Romania, Germany and many more have welcomed the refugees with open arms and helped them. This has also shown Ukraine who its friends are, and Belarus and Russia are definitely not among them.

“Everything is going to be fine in the end,” Oscar Wilde said. “If it’s not fine, it’s not the end.” That's what I tell myself every day. There will be a good end and then the country will be rebuilt and developed again. I think the war has made people strong, especially morally – even stronger than before.